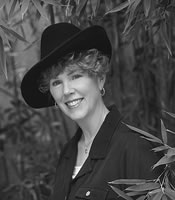 Always a passionate lover of books, this New York Times bestselling author first answered a call to write in the summer of 1980 and swiftly embarked on her own mythic journey.

Her first book, LOVE’S ELUSIVE FLAME, was published in 1983. DAWN OF DESIRE, her thirty-fourth romance was a May 2008 release.  With more than seven million copies in print of her historical, contemporary, and futuristic books written under her own name as well as her pseudonym, Cinnamon Burke, she is as enthusiastic as ever about her love of writing.

A native Californian, Phoebe is the mother of two grown sons and one adorable grandson. She attended the University of Arizona, and California State University Los Angeles, where she earned a BA in Art History, and an MA in Education.

She has won several Romantic Times Reviewer’s Choice Awards and was nominated as Storyteller of the Year. She is a member of PEN, Novelists Inc., and Romance Writers of America.

You can learn more by visiting her website at http://www.phoebeconn.com.

Dave Olson fails to find a publisher for his coming of age novel. When he learns paranormal stories are selling well, he creates the ultimate vampire novel with Jesus as one of the main characters.

Even with the best of intentions, nothing about their high-school reunion goes according to plan, but with a change in partners, Carol, Suzanne and Aimee all find a second chance to love.